Pho is the national dish of Vietnam and it's ALSO one of my favorite soups. The broth is full of complex flavor, there are noodles in it, and I can eat it with an outrageous quantity of fresh herbs. So anyway, what can I contribute to the long history of this soup? Well, it's not much, but I did eliminate the need to buy meat specifically for the dish. This recipe for meat scrap pho uses the trimmings from previous meat-based meals, that you would otherwise throw away.

Stop throwing away all of those meat scraps and instead use them for something tasty. Every time you trim meat for another dish, simply place the extra bits and bones into a sealable bowl, bag, or other preferable storage vessel and toss it in the freezer. Once you have enough scraps, they can be added to this pho recipe still frozen.

Have extra vegetable scraps? Make your own chicken stock.

Chicken: I think that chicken is the best meat for this scrap broth. Trimmings from chicken tend to have more bones and less fat. That means less work for you and bones provide a ton of flavor.

Beef: This is my second favorite choice for this pho. The extra fat content means that you have to spend a little more time skimming the broth. However, beef has a nice deep flavor that really compliments the broth.

Pork: You can use pork but it requires the most work for the smallest pay off. Don't feel deterred if you have a ton of pork scraps but keep in mind you'll need to skim quite a bit.

Char your onion and ginger well. These ingredients are the aromatics for this dish. They contribute extra depth of flavor, particularly when well charred. Wait for your oil to get sizzling hot (see video below) before adding the aromatics. They'll char quickly when added to a very hot pot.

Make sure to use enough trimmings. In order to get really flavorful broth you will want to have at least 2.5 pounds worth of meat scraps. Depending upon how often you eat meat, that may take a while to accumulate. It takes me about 2 months to acquire enough scraps for pho.

Do extra skimming. Compared to a standard pho recipe, there will inherently be more fat in this one, due to the nature of the protein used. That means that you will want to take a little extra time skimming the fat off the top. This will ensure that you end up with a nice clear broth.

Use the meat from your scraps. After you strain your broth, you will be left with a pile of mush. Within that mush is some amazingly tender and flavorful meat. See, you have effectively been slowly braising your scraps, the fat has melted down, and you're left with a surprising amount of meat (unless your meat trimming skills are excellent).

One of my favorite things about eating pho is finding out how many fresh herbs and jalapeño slices I can shove into my bowl. I also like to mix in a little lime juice, sriracha, and hoisin to finish it out. Mix and match your favorite ingredients from below. Check out this guide to Asian sauces to decide which you might want for topping your pho.

How to Store the Broth

Store broth in the fridge for about 5 days.

This broth freezes very well, making it a great make ahead option. The quality will remain high for around 6 months in the freezer.

Get your broth a'simmering, melt into your couch, and enjoy your free aromatherapy session. 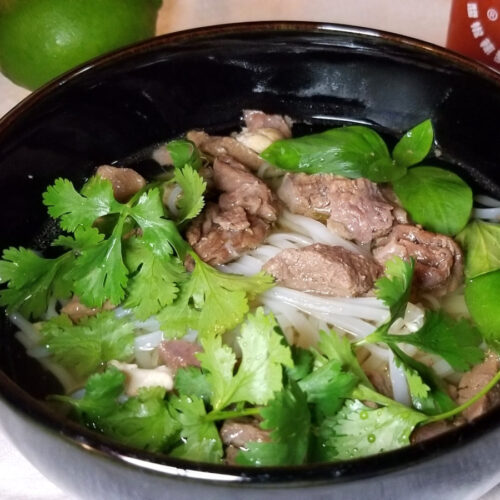 The bowls - only the noodles are required - mix and match

This site uses Akismet to reduce spam. Learn how your comment data is processed.